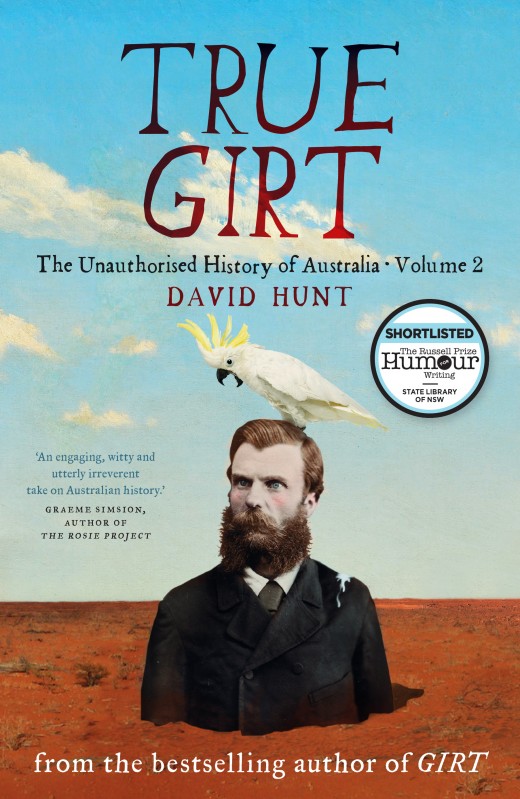 First there was Girt. Now comes …

In this side-splitting sequel to his best-selling history, David Hunt transports us to the Australian frontier.

Learn how Truganini’s death inspired the Martian invasion of Earth. Discover the role of Hall and Oates in the Myall Creek Massacre. And be reminded why you should never ever smoke with the Wild Colonial Boy and Mad Dan Morgan.

If Manning Clark and Bill Bryson were left on a desert island with only one pen, they would write True Girt.

“An engaging, witty and utterly irreverent take on Australian history.”

“Astounding, gruesome and frequently hilarious, True Girt is riveting from beginning to end.”

‘David Hunt’s riotous, hilarious and enthralling history of Australia cleverly belies the weight and breadth of his knowledge. Unputdownable. I loved it.’

— Paula Byrne, author of the international bestsellers The Real Jane Austen and Kick: The True Story of JFK's Sister and the Heir to Chatsworth

‘It is all as hilarious as the first book and delves into serious history, albeit in a not very serious manner.’

‘Another entertaining, opinionated and thought-provoking take on the great Australian story’

‘True Girt will undoubtedly be as popular as Girt, and fans of both will no doubt look forward to whatever subsequent volumes are planned.’

‘Erudition leavened with wit, this should be a definite addition to your bookshelf’

‘[David Hunt] is an irreverent writer who makes history accessible through humour.’

‘True Girt is a fresh, funny and highlyentertaining account of a sometimes bloody history that will make the most reluctant student of history sit up and listen —and laugh.’